In writing a biography it is customary to go back to the time before the birth of the hero and this I am able to do.  When I was aged three or four, my brother and sister were one day indulging in reminiscences concerning my arrival. They recalled watching Mr Wheelhouse, the family doctor, walking across the piece of vacant land which led up to our house carrying a brown paper parcel with the new baby inside it. At this point, a small voice chimed in, “Yes, it was stuffy inside there. I was glad when he undid the string.” 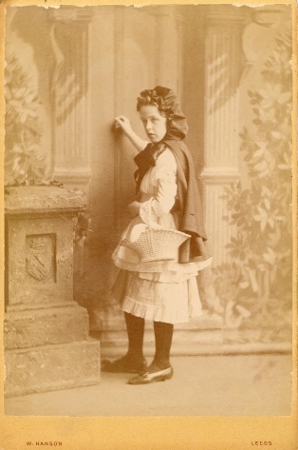 My father had a severe illness which necessitated our parents being abroad a good deal for a year or two so we were left a good deal to the care of nurses when we were quite small. This was also due to the fact that my mother was very shy and, I fancy, somewhat afraid of children.  Those to whose tender mercies we were consigned would not have agreed with the modern ideas for bringing up children.  Their methods were firm but also chaotic: the first nurse was in the habit of drugging my brother so that he might be left with impunity outside the pub whilst she refreshed herself at leisure. This habit was not discovered until she had nearly succeeded in killing him, treatment to which I am inclined to impute his subsequent delicacy.  Her successor was less subtle in her methods. She kept order with a cane and when this was taken by a young cousin whilst we were on a visit to his mother’s during one of the periodic absences of our parents, she replaced it by a whale bone out of her stays, announcing that this at any rate was her own so that he could not take it.  I was evidently possessed of good lungs and a sturdy temper and it was her custom, when I made too much noise, to take me by the heels and bang my head on the floor so that I might bite my tongue. History does not relate whether this had the desired effect of reducing me to silence. However, except for the effect of the drugging on my brother, no-one seemed one penny the worse.  But perhaps it was in consequence of these adventures that when it became necessary for my father to spend the following winter in the south of France, it was decided that the family should go too.  I think we must have created a record, for though I was only two and the others eighteen months and three years older there was only one cry from the whole party during the entire journey.  My earliest recollection is of having my finger bitten by a swan in the hotel garden during this visit.

Our next nurse was chiefly remembered for the multitude of hymns which she could repeat. Her successor, the last nanny we had, was good to us when not in a temper and we were really very fond of her. However, perhaps we were not quite so devoted as our elders imagined for it was made quite clear to us, when we went downstairs for the daily half hour after tea, that we must not omit to ask to go back to ‘dear nurse’ and any forgetfulness on our part was signalled by sundry severe ‘pinchings’ to improve our memories for another day.  These visits to the drawing room were too much associated with clean frocks, and injunctions to keep quiet and behave nicely for us to relish them greatly. But the time we did look forward to was our descent for desert on Sundays after which father turned himself into the Tower of Babel, up which we climbed with unflagging zeal.  In those days I was very fat and round so that I was always falling down on our walks; in spite of which our nurse, who was very fond of walking, used constantly to take us to Arthur’s Seat or the Dark    Arches, a long distance for such small people. 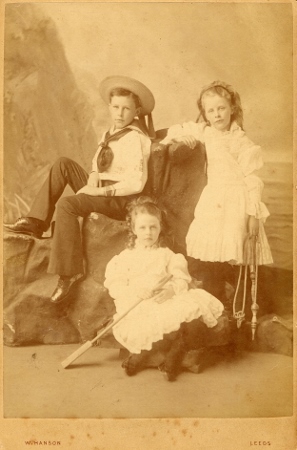 All through our childhood, my sister Ethel took the lead and we never dreamt of disputing her sway.  My brother, Bob, was even known to have said when asked why he was absent from school the previous day: ‘Please, Sir, Ethel said I had a cold.’  We lived a free and active life, climbing about in the garden, though two or three incompetent governesses flitted across the horizon. Their task was not an easy one as Ethel was a precocious child, reading fluently at the age of three and teaching my brother who was a year older.  Later she insisted on learning Latin as he was doing it at school; the unfortunate governess had to study it too to keep just ahead and when one day she left her exercise book about, Ethel got hold of it and corrected it.  We must have been somewhat unpleasant children; our joy was to drop dahlia stalks over a high wall on the heads of the passers-by or, when taken out shopping, to poke people with umbrellas as they passed the carriage window.

The succession of governesses was a long one, from the elderly lady employed as a kindness to relieve her indigence, to those with high salaries and flowery testimonials. However, their reign was brief since each in turn suffered from Ethel’s too exuberant energy, which kept them in a state of terror as to what her next enterprise might be. When not climbing every tree in the garden - to the terror of the artist who had come to paint our portraits - she was leading me in my Sunday best, tightly clutching my new royal blue prayer book from which I refused to be parted, down a long, damp and beautifully muddy drain. This exploit caused us unholy joy, as well as putting an end to church-going for that day. 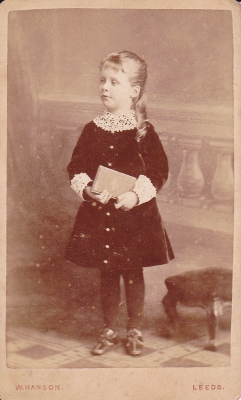 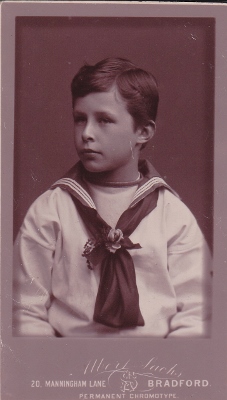 Eventually Ethel locked one of them, who rejoiced in the appropriate name of Whippam, in the slaughter house and then trapped her in her room by tying a bell on a rope round the door handle. Every effort she made to escape was noted by her gleeful captors. Thus it was felt that school was the only remedy for Ethel and thenceforward life became much more tranquil.  Somewhat naturally, I was the favourite being much too stout at a tender age to be anything but placid; so I submitted unprotestingly to a lady whose idea of music lessons was to place me on the music stool in the drawing room, whilst Ethel was left standing in the corner in the school room, and kiss me at frequent intervals.  However, I did wish that she was less like unto Esau (in the moustache department). 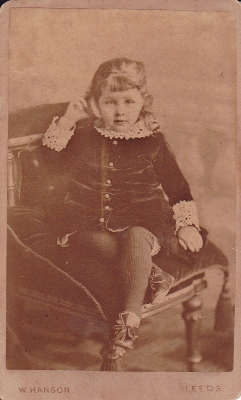 I think I must have been a singularly unimaginative and matter-of-fact child; fairy stories hold no appeal for me and to this day I have not read Grimm or Hans Anderson, nor the Pilgrim’s Progress. From the day when Ethel ceased to play with dolls I never touched another.  A tendency to take Martha’s attitude towards life is probably another part of the same trait; it is so much easier to use one’s hands than one’s head.

For some strange reason I was considered a delicate child, so was kept at home, a cousin being imported to do lessons with me, until Ethel left school when we were both despatched to Paris for three month with a governess still in charge. We lived in a family whose manners and customs were something of a shock to us. The fact for instance that no one thought of dressing until after dejeuner but went about in peignoirs and curling pins. If we were going to an evening party we were implored not to put our corsets on in the morning for we should be so exhausted if we wore them for so long. When we went to dances with the family the only drinks provided were beer or grog, which consisted of whisky, gin or cold tea, altogether too stimulating a beverage for the unaccustomed. Being young, shy and rather silent, I hardly ever spoke during the entire three months and except for seeing the sights of Paris - pictures, museums and great buildings, the time there left little or no impression on me.