Our grandfather, Herbert Seabury Hunt Ashmead-Bartlett, known as Seabury, was born at Eastbourne in April 1887 and died in Harare, Zimbabwe in 1957. He was the third of five sons of the MP, Sir Ellis Ashmead-Bartlett and also had three sisters, Audrey, Irene and Sybil. 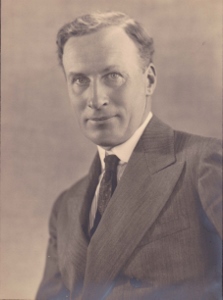 Seabury served in the Royal Navy from 1903 until 1907 when he was invalided out after suffering from ‘Malta’ fever, or brucellosis. He almost died of this disease in 1906 and my mother recalls him telling her about his ‘out of body’ experience when he felt as though he was on the ceiling looking down at his own body. He spent time as a patient at Haslar hospital in Portsmouth and then at a convalescent home in the Isle of Wight. In 1902 when Queen Victoria died, her children decided that they were not very fond of Osborne House and it was given to the government of the day to be used as a convalescent home for service personnel. The stable buildings were converted for use as a training school for naval cadets. It was here that Seabury spent his convalescence. He is seen in the front row, third from the left, in the photograph.

During the First World War, Seabury signed up again for public service this time in the Royal Field Artillery. After a period of training on the South Downs, he saw active service at the Second Battle of Ypres in from late April and was wounded on 31st May 1915. He describes some of the first gas attacks and the complete destruction of Ypres by the Germans. He was invalided home once more and went to Devon to recuperate.

Just before going to France, Seabury had married our grandmother Esther Capel-Cure and his diaries vividly convey his great happiness and love for his new wife. He poignantly talks about the difficulty of constant goodbyes and short hours snatched with her whenever he could get leave. After he was wounded, Seabury went to recover his strength at Esther’s parents house in Salcombe. He gradually became strong enough to do small jobs around the house but wound infection prevented a swift return to active service and he spent time on light duties after resuming his career.

In 1918, Seabury returned to France and his second period of active service is recorded in his book From the Somme to the Rhine which he wrote in 1921 from his wartime diaries. Seabury's diaries are particularly valuable because of his training as a journalist. He briefly worked for The Daily Mail.On 5th March 1915 he recorded his feelings on joining the Army:

The usual routine with nothing of special note to break its dull monotony.  The worst of being a soldier is that one feels all one’s work is futile because it leads to the ultimate destruction of life and property.  With what pleasure I could fulfill my duties did they consist in drilling and training the men to till the soil, and what joy we should all derive from a day’s healthy labour on the land.  As it is we parade the barrack square drilling with rifles and guns which is so much waste of energy.  I think that even the dullest of the men have a dim consciousness of this at the back of their minds.  It is better for our consolation to think that one is going to protect others who will do the work, because if man could only evolve a rational system of civilization no arming against aggression would be necessary.

And on the following day:

A lovely spring evening – the first of the year.  If only the world were at peace and Ettie was with me. How we could enjoy if wandering over the grey Down, with the call of nature’s rebirth in our veins.  How sad that at this of all seasons the nations of Europe should be fighting.  Five more officers, Williams, Lubbock, Griffith, Hilyard and Hutchinson have been warned to hold themselves in immediate readiness for embarkation.  The gradual departure of one’s friends is sad.  I am growing more reconciled to the idea, and were it not for the thought of Ettie I should leave for the front with no regrets, but when one has found the love of a good woman it is hard to go out into the great unknown all alone.