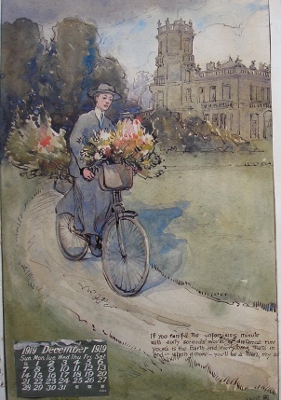 For the first three years of my life we had lived in Hyde Terrace, moving from there to Cardigan Road, and then at the age of nine, on the death of my grandfather, to Elmet where the next 34 years were to be spent. For two brief years during that period, whilst the rest of the family were in Sicily, I had a small house at Ilkley. The view from Elmet with the ever-varying play of light and shade, sunshine and storm sweeping across it, grew unconsciously to be part of my being. With it I absorbed an ever-increasing love of the country and nature, so that now nearly all my holidays are spent in tramping or cycling through England. The fact that the friend with whom I usually went was a painter taught me to see things to which I had hitherto been blind: the wonderful gradations of shade and colour, mass and outline. I believe that those who are not artists need to be taught to see just as much as being taught to sing. Very often people go through life, unconsciously of course, blind and inarticulate though they possess both eyes and voices. Vision or its enlargement may come suddenly to me. For instance, the gift of one of Arthur Rackham’s books has made every bare tree a joy and added enormously and permanently to the joy of life. So it is very difficult to decide whether winter, spring or autumn is the more beautiful season.. 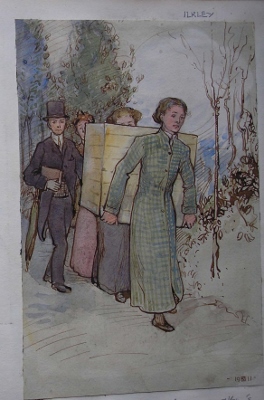 I am of course a “Leeds loiner” born and bred, as a small boy my father used to pick wild flowers on the banks of the canal in Hunslet. Kitsons have always lived, loved and worked in Leeds and naturally this colours my whole outlook on life and I love the dear grubby old place, from its beautiful and dirty river to the old bear pit in Cardigan Road. And yet, the place where I feel most at home, as though it were part and parcel of my being, is Upper Wharfedale with its rocky hills, its stone-roofed farms and magnificent barns looking as though they had grown out of the soil rather than being the work of men’s hands.

On leaving school, as happens I suppose to most girls at any rate those living in a big industrial city, I was pitch-forked into social good works, beginning I remember with Sunday school teaching – or so-called teaching – as I was utterly unfitted for it. It is a skilled occupation and one for which recruits are taken more haphazardly than for any other work. From that it was only a gradual ascent, or decline, until I was in the shocking position of being on thirty or forty committees.

However, for many years games were my chief interest in life and a week that did not hold a full share of them was indeed a blank. Moreover, a wet day that cut off the chance of a cricket match was little short of a tragedy. Football being impossible since no one else played it, hockey had perforce to take its place. I look back with surprise and amusement to the way in which I ruthlessly bossed the Leeds team and club, which contained a number of comparatively elderly married women. As one member was heard to say, “Beatrice Kitson is a good person to have as captain as she doesn’t mind what she says to anybody!” I also captained the Yorkshire team for its first two seasons and vividly remember our very earliest match. Cheshire was one of the best counties, we were raw material and much of it poor material at that, and before the end of the match our goal keeper had lost her head so severely that she was putting balls through her own goal. The journeys to other towns were nearly as enjoyable as the matches with eleven young things full of life, noise and bad jokes packed into a carriage. But the fact that we none of us died of pneumonia is somewhat wonderful. There was one match especially, which we played at Manchester on the day that it was made known that the old Queen was dying. We started in a blizzard which first drove through you from the front and after half time soaked you at the back. Fortunately, there was about to be a local rummage sale and the goods were collected at the house where we were given tea; as a result some of us at least could be rigged out in dry, if rather damaged garments. But three of us tipped a porter to get us a hot water tin and took it in turns during the one and a half hour journey home to sit two at a time leaning against it, whilst clouds of steam from our wet garments filled the carriage. I capped off the day by going home on the top of a tram, still quite wet in that icy blast but never had so much as a cold. 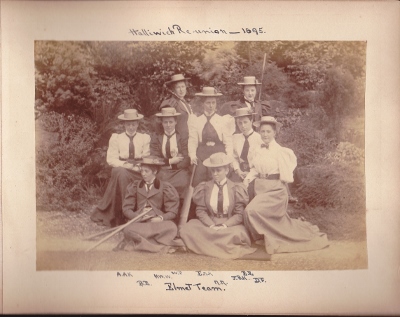 But no game could compare in my estimation with cricket; I was not much good as either bowler or batsman, but there are two catches which are still a solid joy and lasting pleasure. Nowadays the sort of zest that one got from games has been replaced by cycling. I get a huge sense of achievement from riding in crowded traffic or swooping down a long, steep hill. It gives one a sense of being very much alive but free almost from the trammels of a too solid flesh. 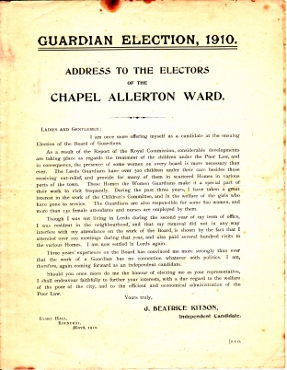 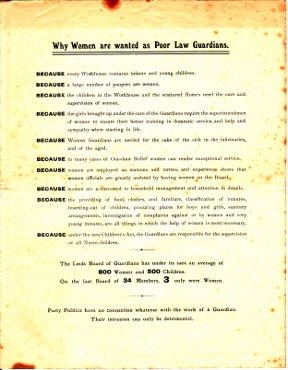 A term on the Guardians opened up a new side of life. It was something of a shock at first that my word counted for nothing and that it was taken as a matter of course that I was only saying things because I had some undivulged purpose to serve. It was assumed that there was an unworthy, though to most of the members a perfectly natural, motive behind everything that one did. Of course all the members were not like that but Leeds has always had an unenviable reputation as one of the worst Boards and few educated men have ever come forward to serve on it. One saw a good deal of the sordidness of public life, though of course the actual work was interesting. However, after 12 years of it I felt that I was somewhat in danger of becoming a mere committee-attending machine running in a stereotyped rut and that what I wanted was some work that would bring me into closer touch with people of the working classes. I had a desire to know more fully at firsthand what their living conditions were really like. So I turned again to work which meant visiting and meeting them in ordinary intercourse.